Enhancing the Plotting Functionality in MCnet/Rivet

Rivet is a tool used by particle physicists to test and develop Monte Carlo event generators, i.e., simulations of particle accelerator collisions. Simulations are crucial for particle physics research, since they can be used to compare theoretical predictions with experimental measurements to discover new physics.

Visualizing the output is a fundamental part of Rivet, since a good visualization makes it intuitive and easy to understand the results. Before the project, plots in Rivet were created by generating and compiling LaTeX commands using a custom python script. While this method does create high-quality plots, it can be slow, have memory issues, be sensitive to the deployment platform, and difficult to debug and enhance.

The goal of this project was to solve the above-mentioned issues by replacing the LaTeX plotting backend with a new plotting backend, based on the matplotlib python package. Additionally, it was necessary to make it easy to export high-quality plots with a simple user interface that meets the needs of most users, while still allowing more customization for advanced users. The plotting program should also be able to output files representing figures in an intermediate format, which allows for easy modifications of a plot.

The main tasks I worked on can be separated into 4 parts:

These tasks are described in further detail below. Additionally, I made minor contributions not directly related to the main tasks, which are listed under “Other contributions”.

In total, I made over 140 commits to Rivet. Most of these commits were made to the matplotlib-GSoC, while some were made directly to the main branch. The hyperlinks link to a list of all commits I made to each branch, of which all commits made up until 20th August 2021 are part of GSoC 2021.

Matplotlib uses mathtext to render mathematical expressions, which is a subset of LaTeX that it can parse and render, without using a LaTeX parsing/rendering backend. Rendering with mathtext removes the need for a dependency on a LaTeX backend and typically improves performance.

Since the plotting backend will be changed from LaTeX to matplotlib, one of the goals of this project was to make all labels in Rivet compatible with mathtext. To make more than 13600 changes, I edited most labels automatically by writing Python code that automated most of the editing process. Some of the labels which required more complex fixes were instead edited manually. In addition to converting labels from LaTeX to mathtext, I also fixed approximately 300 LaTeX syntax errors that existed in some of the labels.

All mathtext-related contributions I made, besides the code for the mathtext preprocessor, have been merged into the main repository. The related merge requests are:

rivet-cmphistos is a command used in Rivet to create the intermediate format for the plotting files. The functionality of rivet-cmphistos (and its successor, rivet-mkdat) is described in the figure below:

The command can be called via the command line with the syntax rivet-cmphistos file1.yoda file2.yoda… . Here, file1.yoda, file2.yoda etc are yoda files containing histograms, each histogram with an ID corresponding to an analysis in Rivet. rivet-cmphistos will then create an intermediate .dat file for each ID, which includes all the data and style settings for the plot. This .dat file can then be plotted by rivet-plot, which is explained later.

To use the new backend, the inputs for rivet-cmphistos needed to be changed, as new plot configurations were added while others were removed. This required a complete rewrite of the code behind the command, especially since the syntax for the intermediate format and .plot files were changed from a custom syntax to YAML syntax, to make the files more readable. The new structure for the .plot files and .dat files were developed during the project and are explained in detail in its documentation.

would give the output files

These changes are currently in the matplotlib-GSoC branch and will be merged into the main branch once the new plotting backend can fully replace the current plotting backend. The main code for rivet-mkdat are in

To plot histograms in Rivet, one can pass the intermediate .dat files to the rivet-plot command, which will create images such as PDFs and PNGs.

The old plotting backend had limited support for plotting 2D histograms. As an example, it could not plot ratios between 2D histograms, which is a crucial feature for 1D histograms in Rivet. One of the main goals of this project was therefore to enhance the 2D histogram plotting functionality.

The plotting code was separated into two parts:

For the general plotting API, I created 4 plotting functions: heatmap, ratio_heatmap, surface, and ratio_surface, as well as the format_axis function which can be used for styling. A tutorial for the general 2D histogram plotting API can be found in this jupyter notebook. 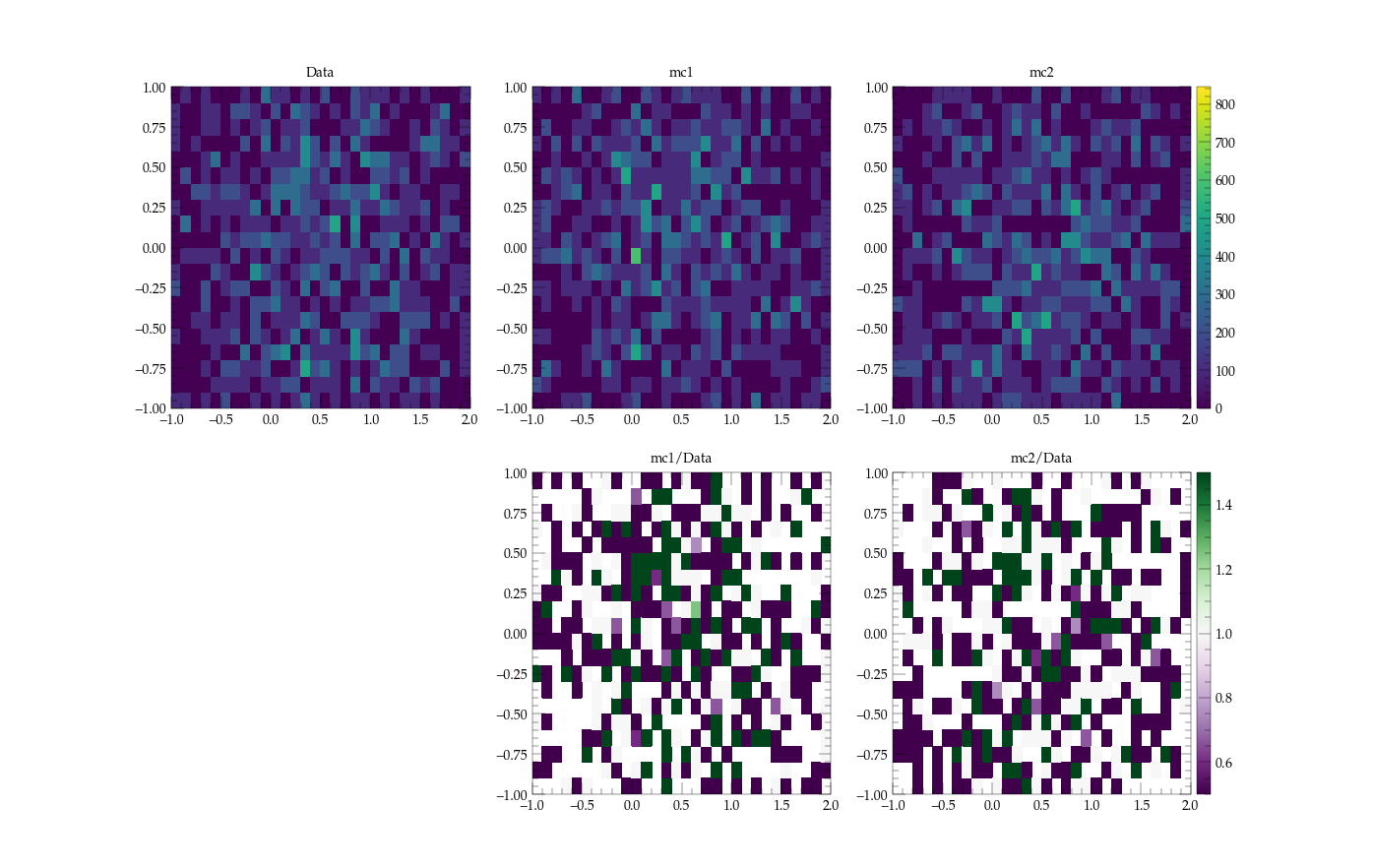 The image below shows another example output of the Rivet plotting API, this time the 2D histograms are plotted as surface plots, which is an alternative to heatmaps for visualizing 2D histograms. 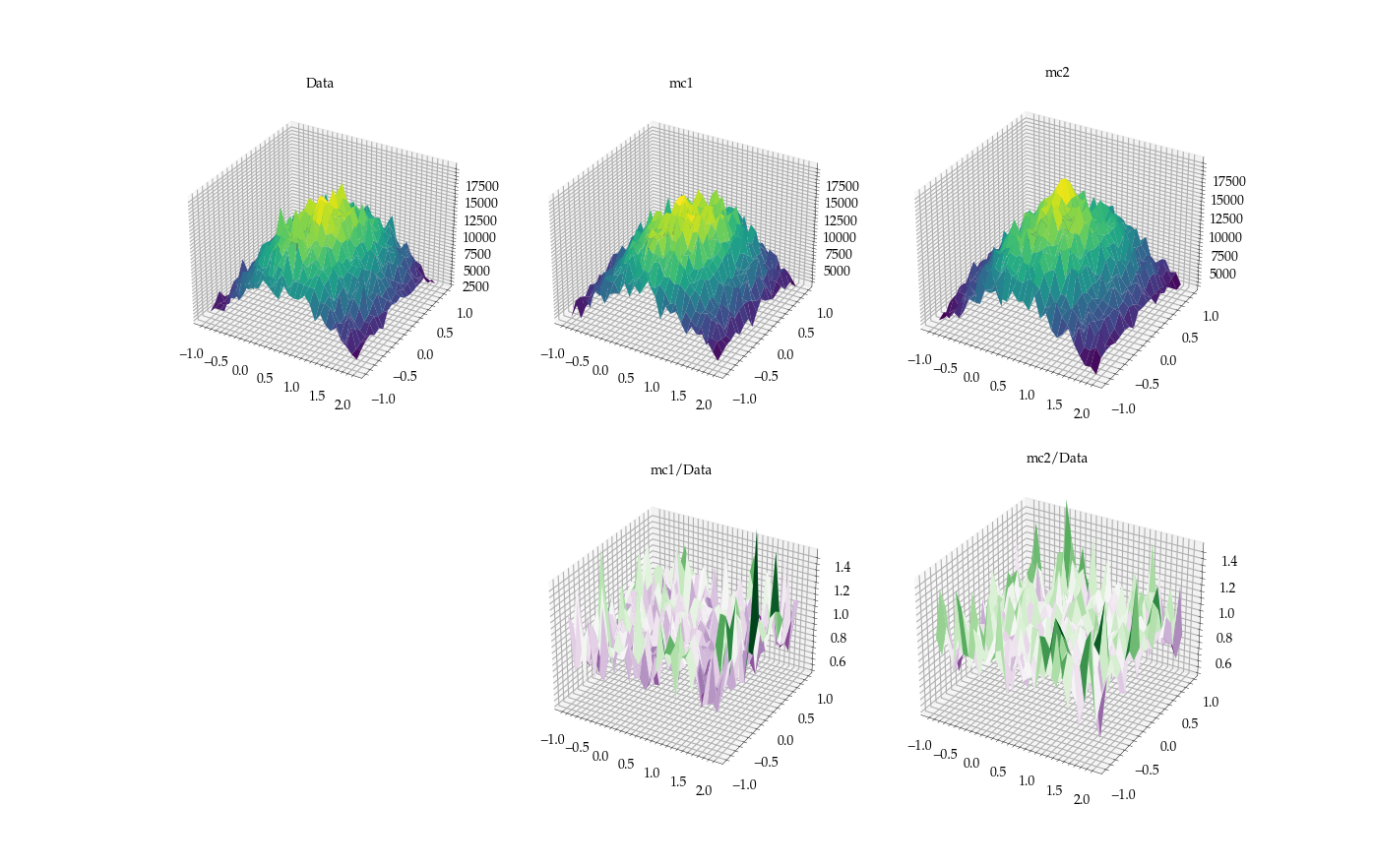 Furthermore, in Rivet one can specify whether all the generated subplots (in the case of the figures above, there are 5 subplots) should be saved as one image file (as in the case above) or as separate files.

I also added tests to the Rivet-specific plotting code using the pytest package.

The Rivet-specific 2D histogram plotting code is in

The general plotting API is in

I also identified which font is being used by the old plotting backend and identified how to configure matplotlib to use the same font. Specifically, for regular text, the URW Palladio L font is used, while for mathematical expressions, the PazoMath font is used.

These fonts are specified via an .mplstyle file, which also specifies additional matplotlib rcParams that determines how plots in Rivet should be formatted.

Currently, manual configurations of the fonts and the .mplstyle file are needed to add the Rivet style to matplotlib. This is something that needs to be improved in the future, by automating this configuration using automake, which will be executed when Rivet is installed. Some resources that are relevant to solving this issue are:

Additional issues and merge requests I have contributed to during GSoC:

In conclusion, Google Summer of Code was a valuable experience for me. I learned how to use git in a collaborative environment, how to use advanced matplotlib, learning which types of software is used by particle physicists, as well as how to collaborate on an open-source project.

I would like to thank my mentors Andy Buckley and Christian Bierlich, who both have been supportive during the entirety of the program and tirelessly answered all my questions. I would also like to thank Matthew Filipovich, who I have worked with during this program and who I could discuss implementation ideas with.